We can admire many interesting murals on the streets of cities of different
countries. We are accompanied by propaganda, advertising, artistic
and social paintings, as well as aesthetic, branded places.
About the latter indirectly will be today. Indirectly, because
the mural I want to introduce to you is in line
perfectly into the space of the place where
it was painted in terms of artistic and content. 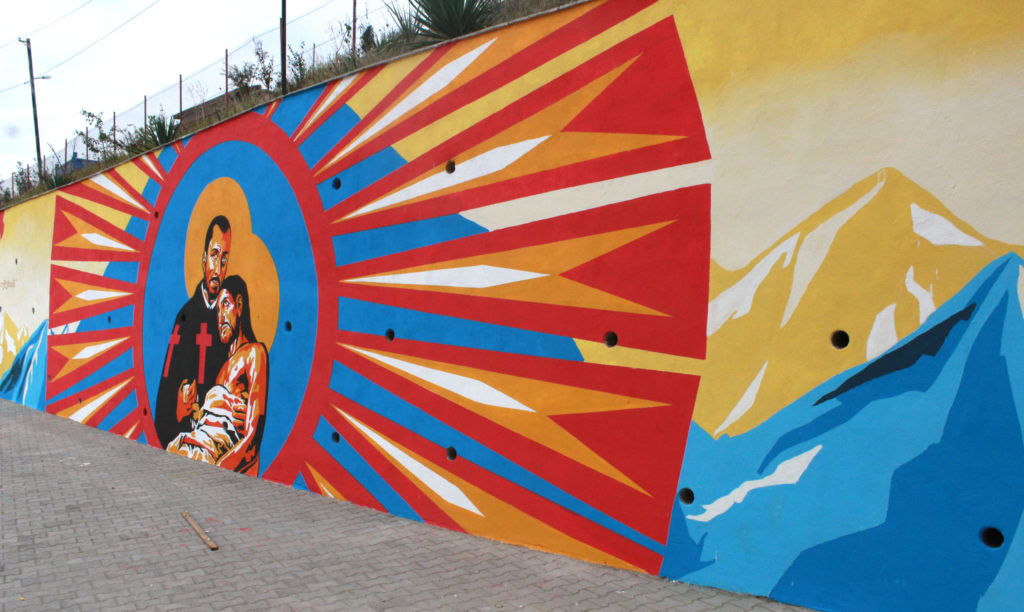 Together with a group of professionals artist from various fields, I was invited to Georgia
to create an unusual mural.

The band was joined by me: Adam Buka – art historian, filmmaker, project organizer, addicted to the sun of the Caucasus, enthusiast of helping who values good and adventure the most; Agata Walinowicz – stage designer and costume designer; Emilia Pietras – artist, model, PR-worker, working for a healthy lifestyle; Janina Tłuczkiewicz – artist, designer; Łukasz Pisarek – an architect who engages in stage and artistic projects, experience gaining in Poland, Germany and USA; Martyna Zybała – lawyer, Radek Skrzypczyk – painter, organizing actions in the urban space for the benefit of the homeless.

We went to work with the whole team. What challenges did we face? There were several of them: dimensioning, priming and surface preparation, composition of elements, choice of style and typography.
We used a variation of the mchedruli script, which means knighthood. The name itself sounds poetic.
The assumption we received from the Kamilians was handing over content related to the culture of Georgia
and a message about mercy. The mural was created in the Center of Saint. Kamila for the Disabled at the
Kamilian Center, who help the poor and sick residents of the Caucasian country. It is a modern medical
and rehabilitation complex, where the poorest have access to doctors of almost all specialties. We had
at our disposal over 80 m long wall, with a height of over 4 m at the highest point. Above the wall,
on the high hill there is a monumental monument to the history of Georgia and Christianity, with
the performances of kings and Saints, founded and planned by Zurab Cereteli –
a painter, sculptor and architect. Our mural harmonizes with the message of the monument.

SEE HOW IT HAPPENED

We started with planning and sketching. During several meetings the concept took shape and was cleaned of unnecessary elements. The style has been chosen.

It is good to have a good architect in the team – Łukasz, who, thanks to his spatial skills and imagination, sized and visualized the wall. The appearance of the wall was also determined by the division of teamwork. Łukasz claims:

“The mural was a challenge because locating it at 80 m determined the linear sequence of compositional points. This form influenced the organization of work, the team worked mainly in smaller groups, but with the possibility of mixing them. I think that it allowed each of us to work in an optimal and harmonious personal rhythm … and thanks to that with a smile. ”

Having the dimensions and segregated fields at the location of the elements, we started preparing the concept in graphic programs. 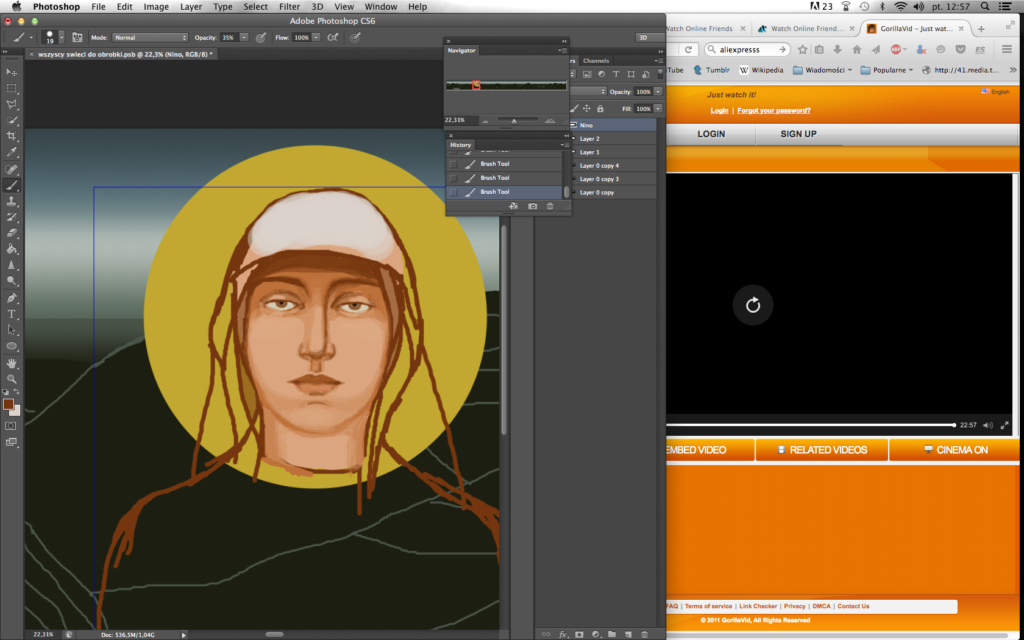 We started with the design of the main elements, which are the characters on the mural, complementing the graphics with further details. It was very important to put the characters in specific historical epochs, that is why the loyalty of the performances and costumes were subject to Agata’s assessment. According to her, each of the costumes carries with each other a different message:

“Saint Nino is usually depicted in a white tunic, a white dress refers to
to her spiritual guidance, the patron of Georgia, like a white dove, carried peace and healing. ”

“Saint Kamil is depicted in a black cassock with a red cross. Red crosses were associated with the symbol of
criminals, carried out for execution on the gallows. Now they symbolize the sacrifice of the Kamilians for
the terminally ill. ”

“Klara is a modern outfit from the turn of ’80 and ’90, a white dress with a covered neckline and a bow tells
about simplicity, modesty and girlishness.” 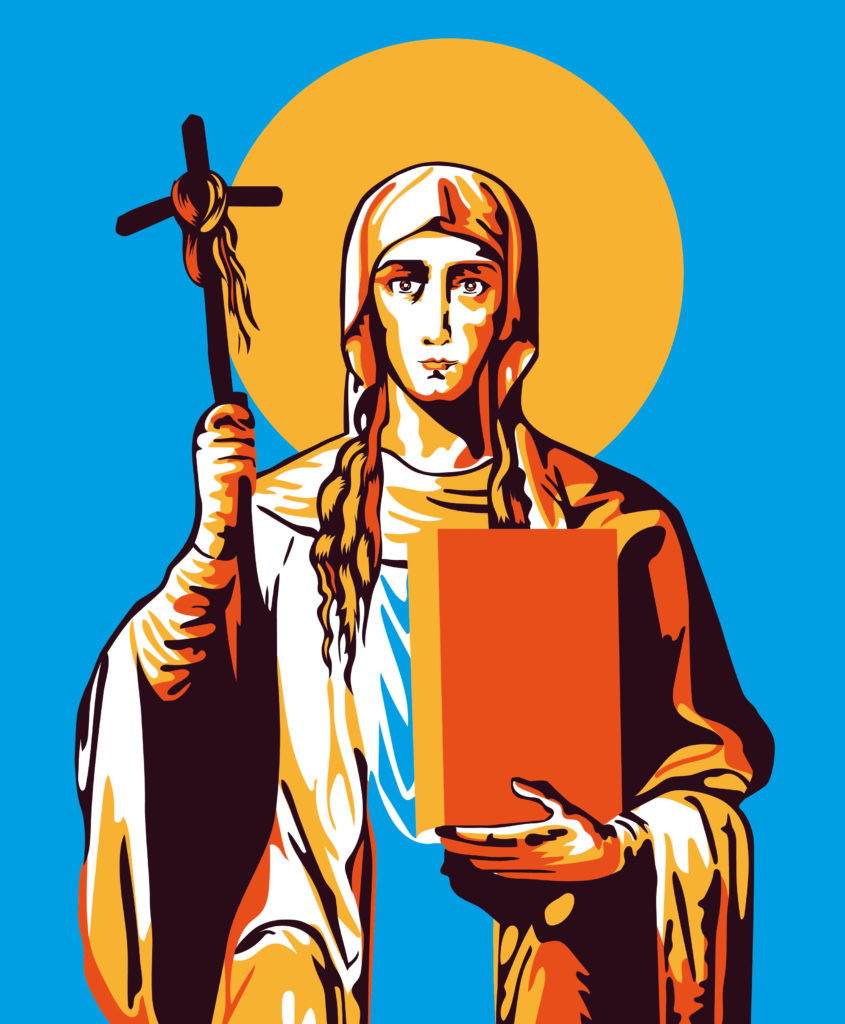 After arriving in Georgia, it was necessary to see the primed wall, check its surface, apply a second coat, prepare and mix selected colors and buy painting tools. Radek watched over the entire process of creating the mural – who every day paints murals from Good Looking, as well as Emilia and Janek, who care about accurate reproduction of details in a synthetic form, especially in the faces of the characters. Professional technical preparation is very important. Already in the painting process, painting tricks were used, which accelerate the creation of some parts of the mural: the use of painting tapes, string to the contours of the aureole, etc. 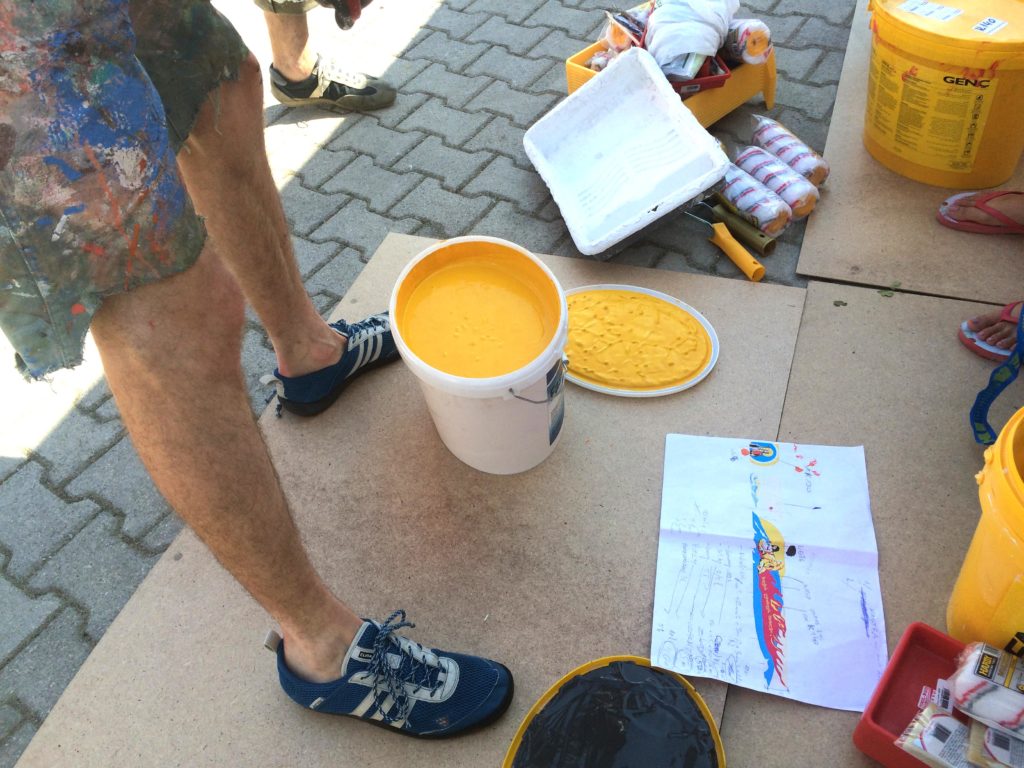 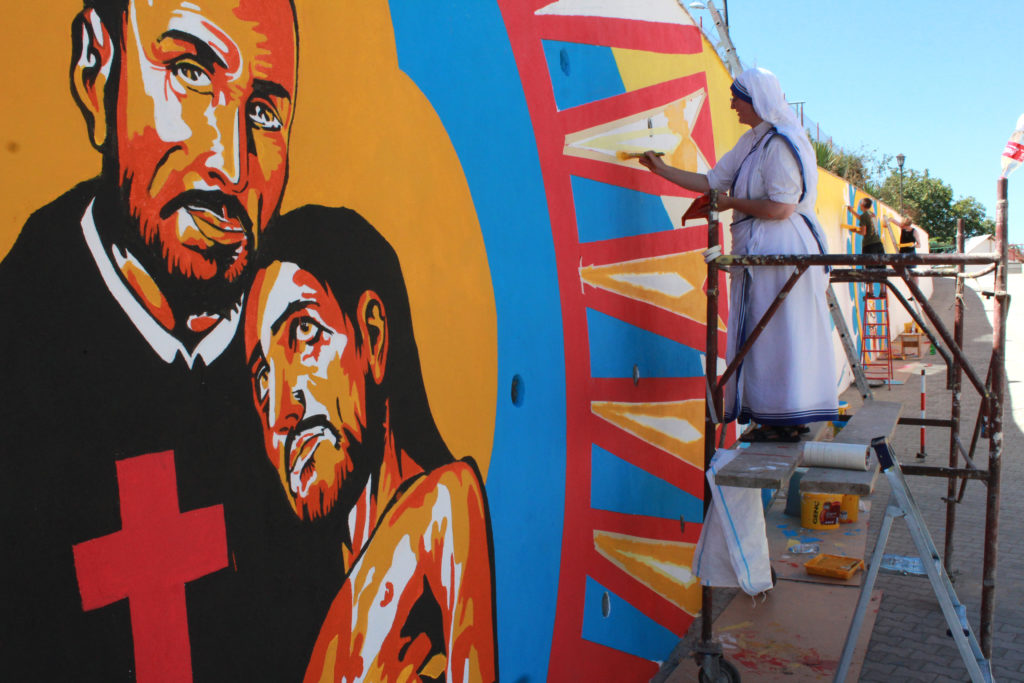 With a ready-made project, we could, with the help of a projector, start with the night pencil mural strokes, the effect of which was the view. 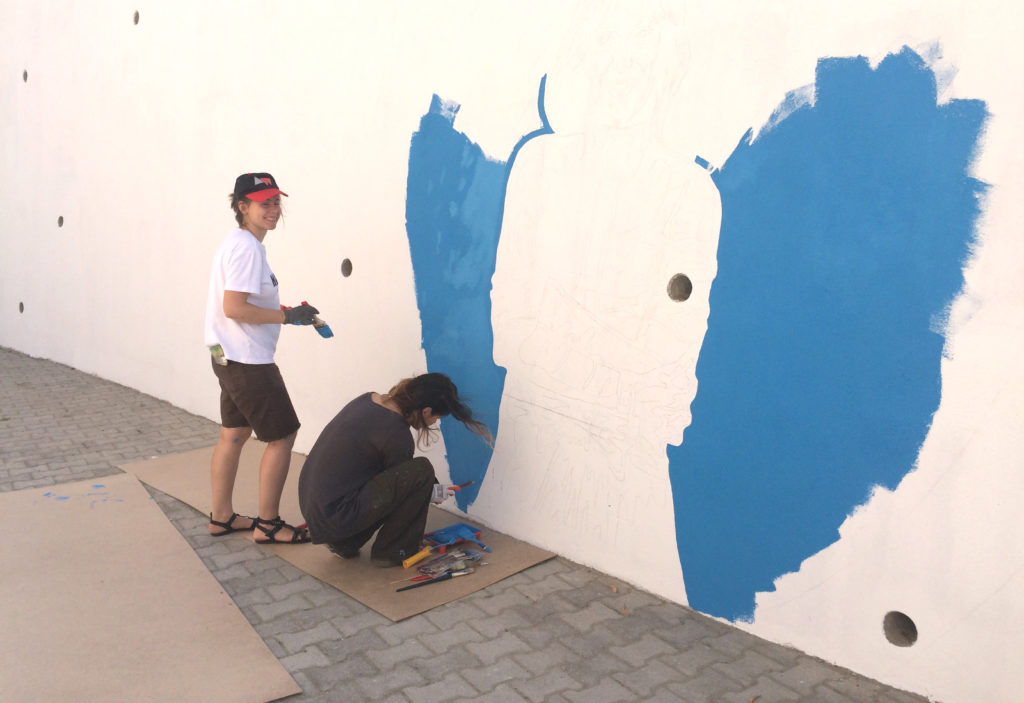 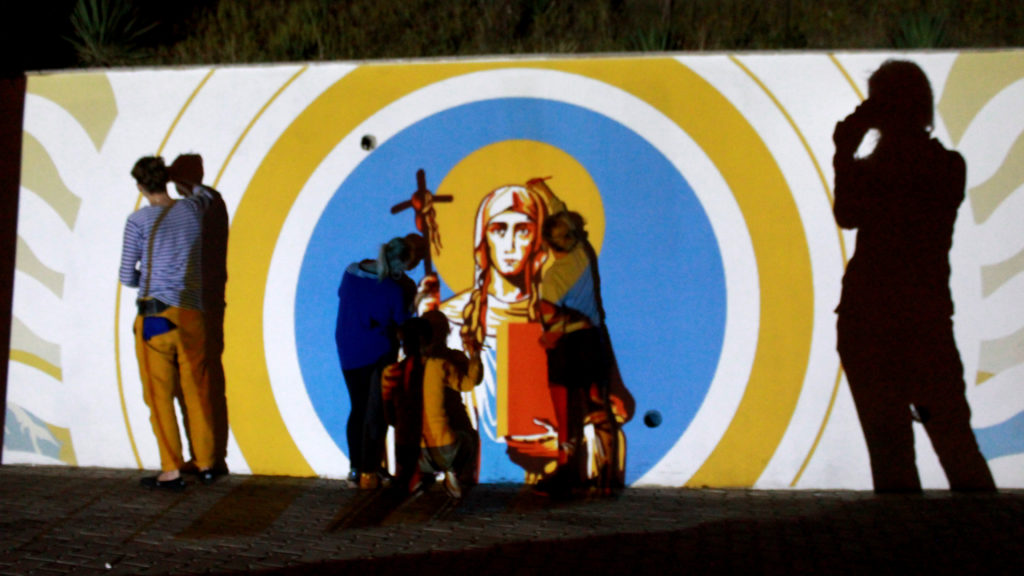 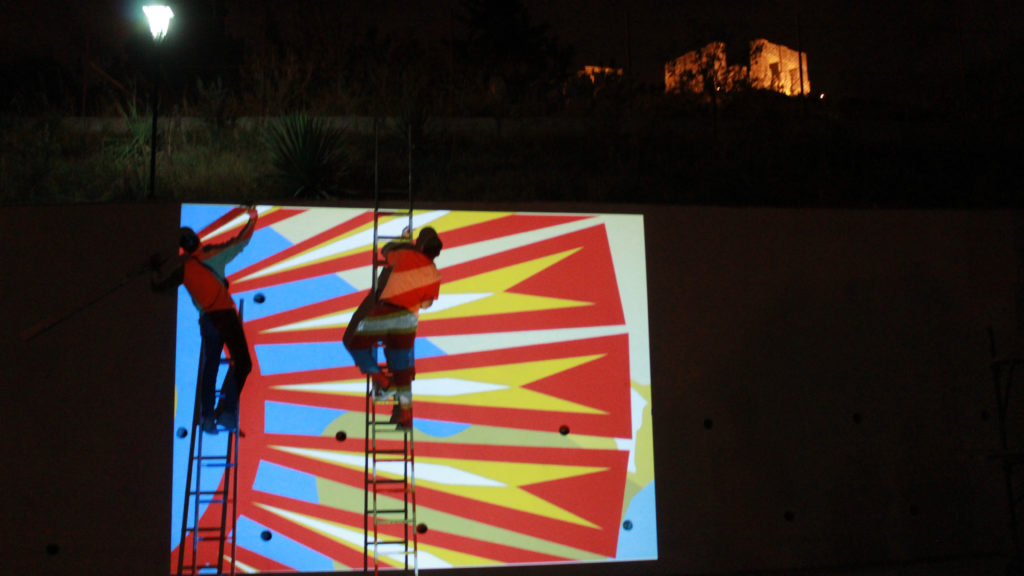 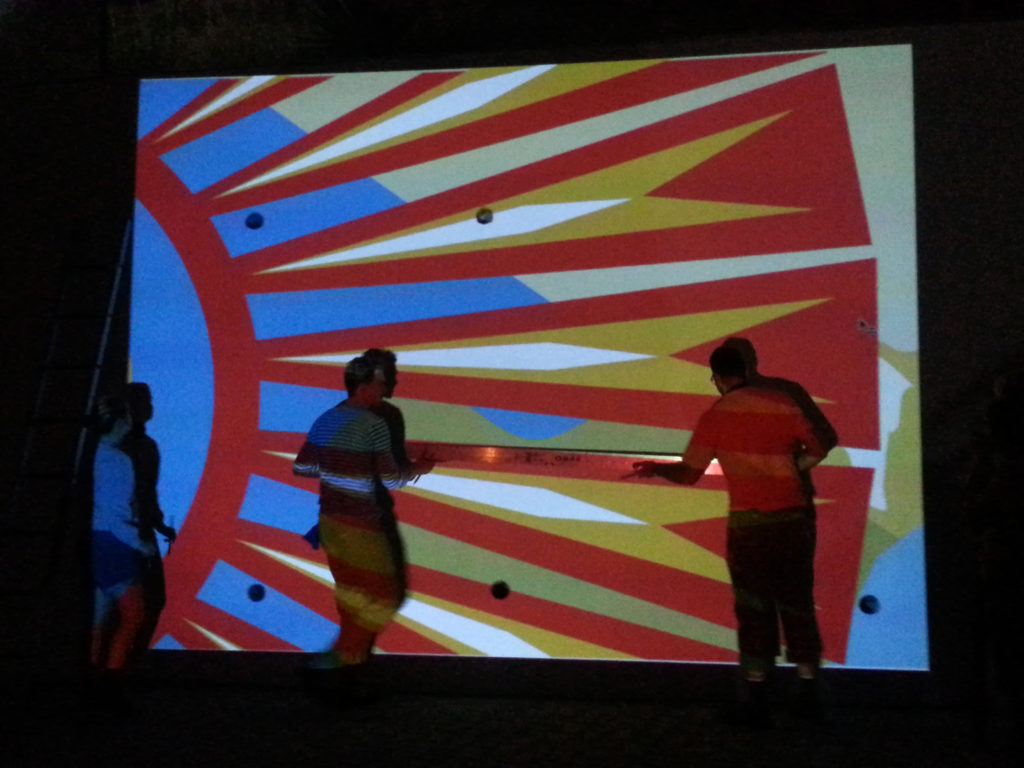 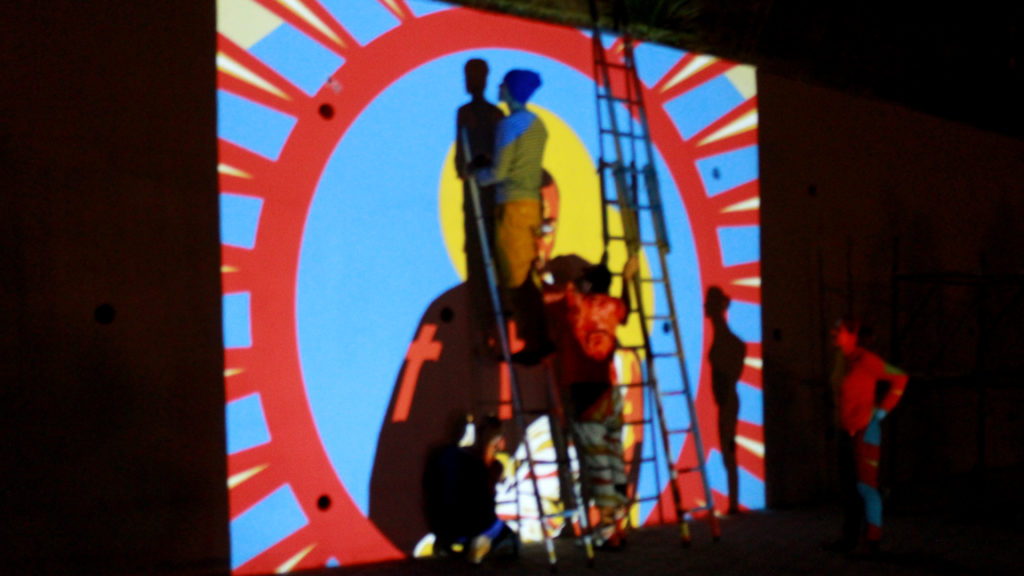 We could spend days on painting together. The finished graphic design underwent slight modifications due to the charm of Georgia and the local community. For example, a vine leaf has been modified. And his draft came from the lawyer – Martyna. Vine, like the whole mural, is the result of teamwork. As Georgians use three types of writing, Kamilianin, brother of Zakro, has translated Adam’s quotes. One of my passions is typography, together with Emilia, Adam and Georgians, I took up the mapping of letters on the mural. You had to be careful not to lengthen or bend it in the wrong shape of letters, because it would change the context of expression. 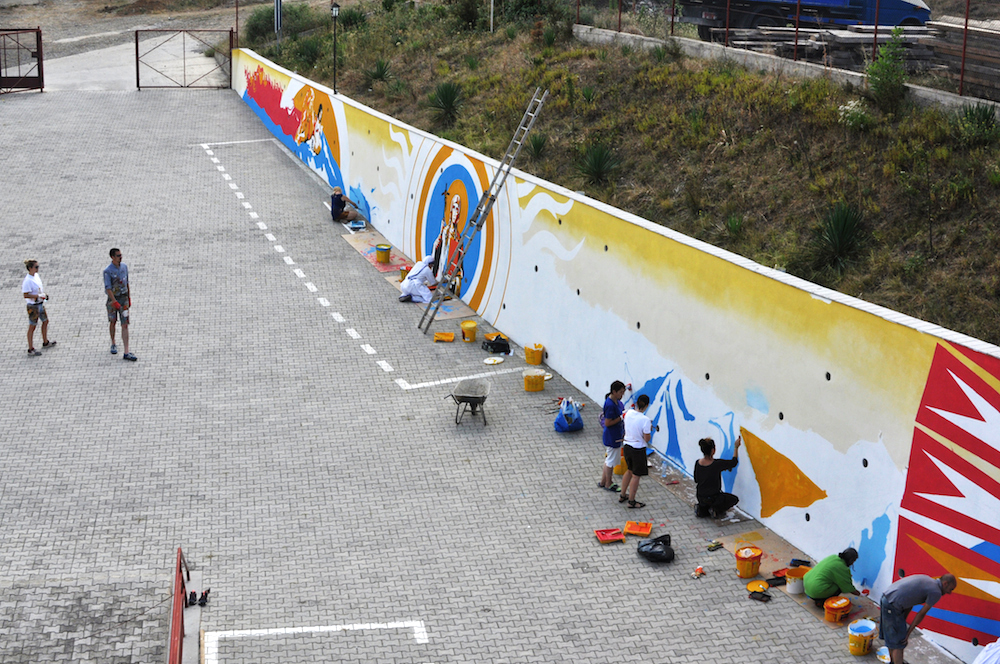 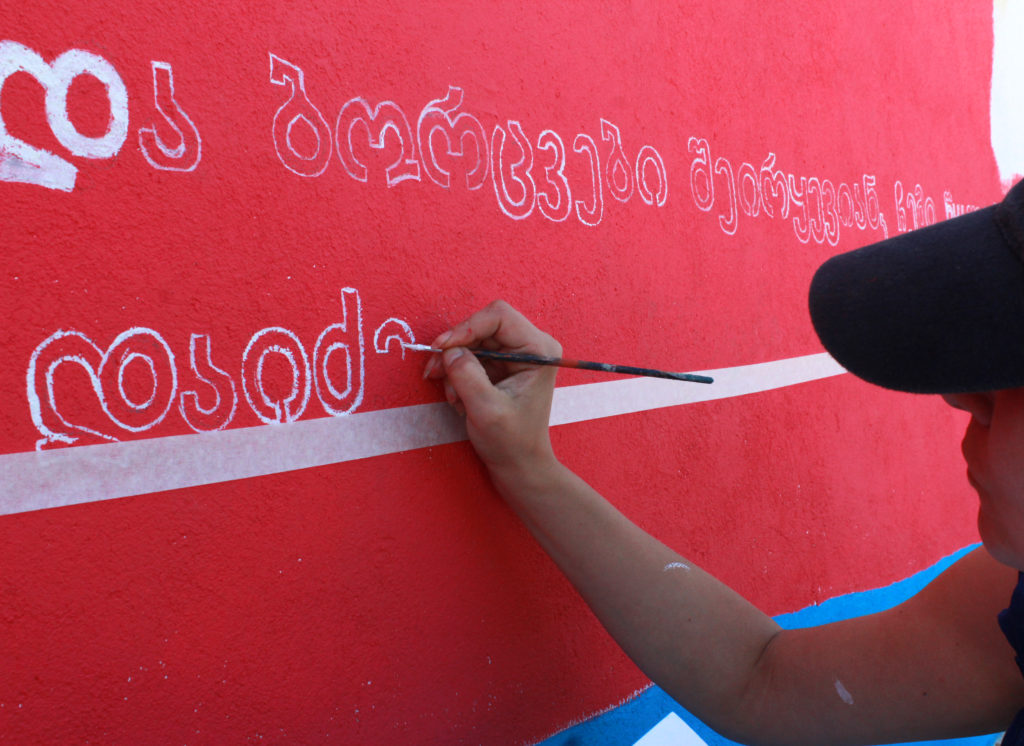 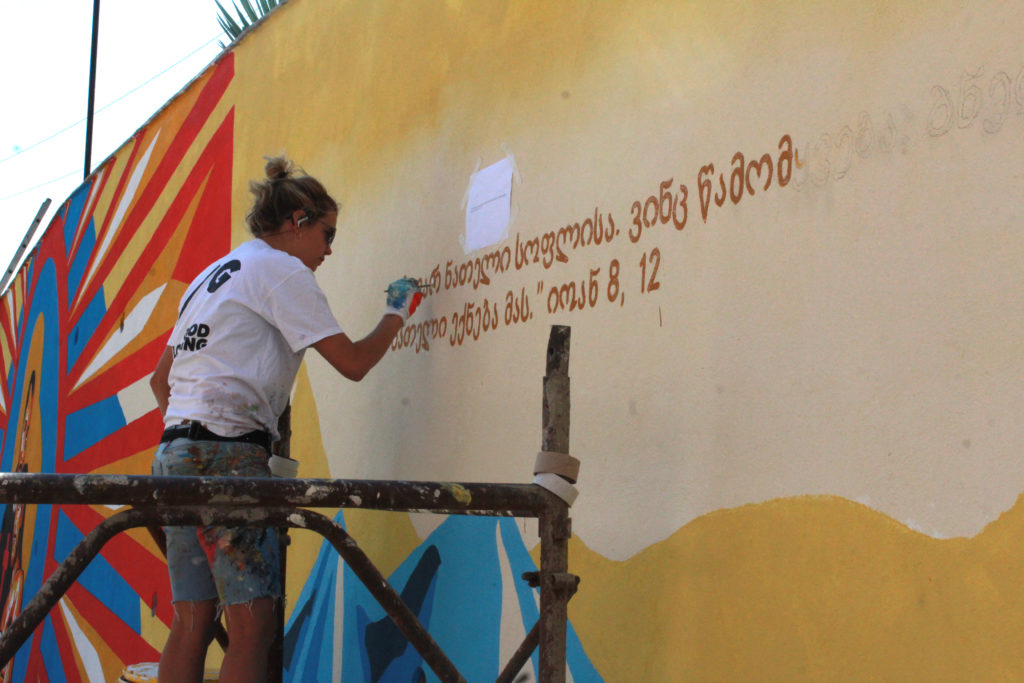 Thanks to the intense work of the team and the local community, we can admire the mural in its current shape. As Martyna believes:

“He grasps the openness of the Kamilians and Radek’s courage, who directs the execution of the project, who decided to give the brush also to the hands of non-professionals with elements that do not require artistic skill or precision. This gave the mural a character – under our supervision it was co-created by the center’s employees, passers-by, consecrated persons, among others Sisters, children, and children! The project has inspired inspiration. 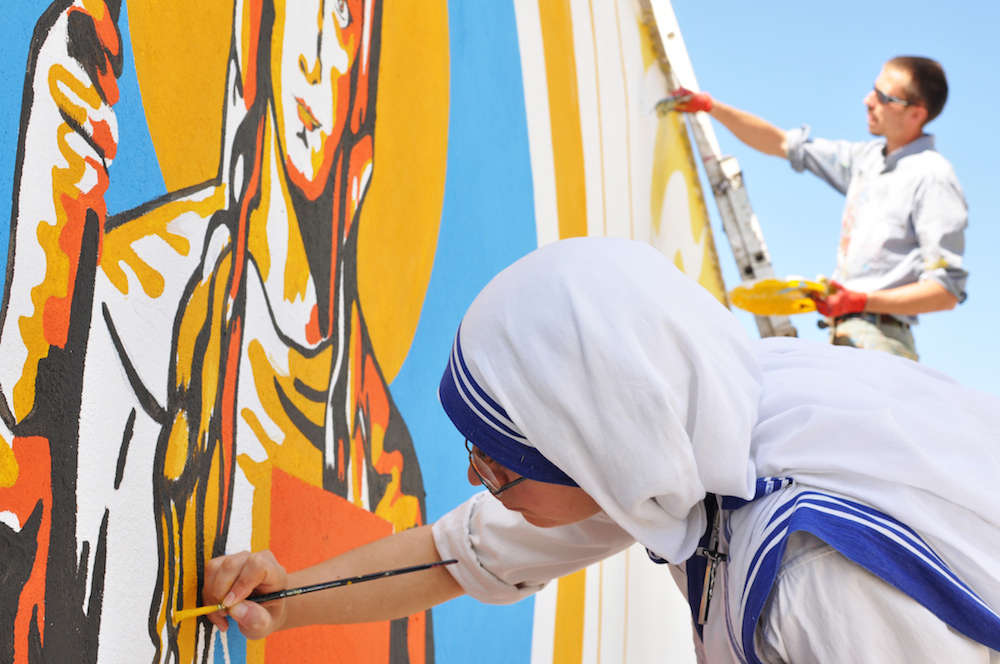 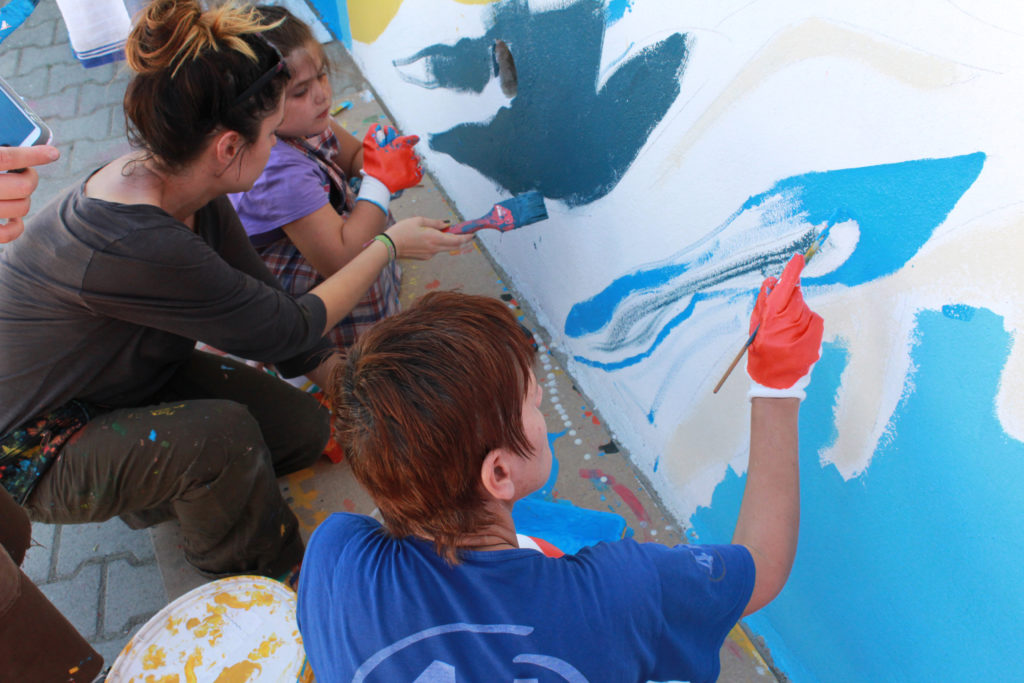 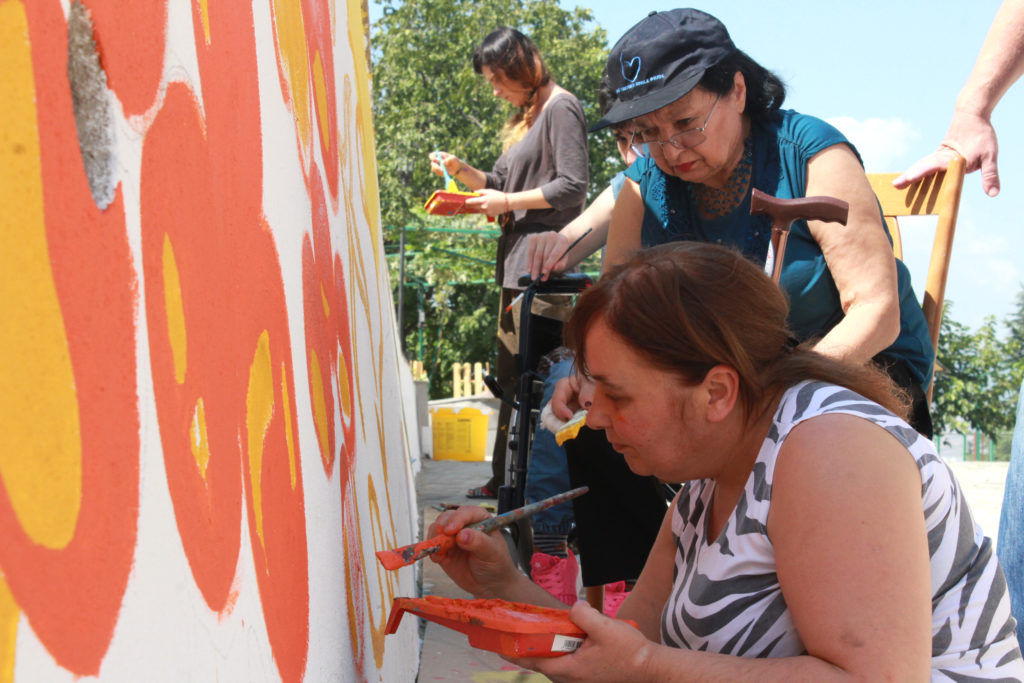 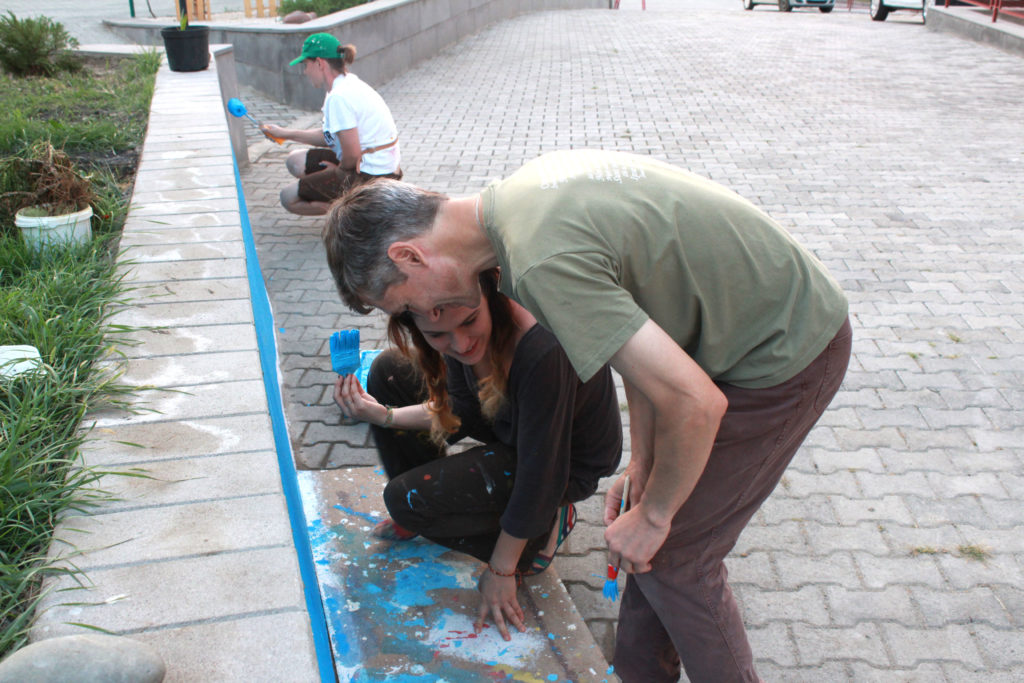 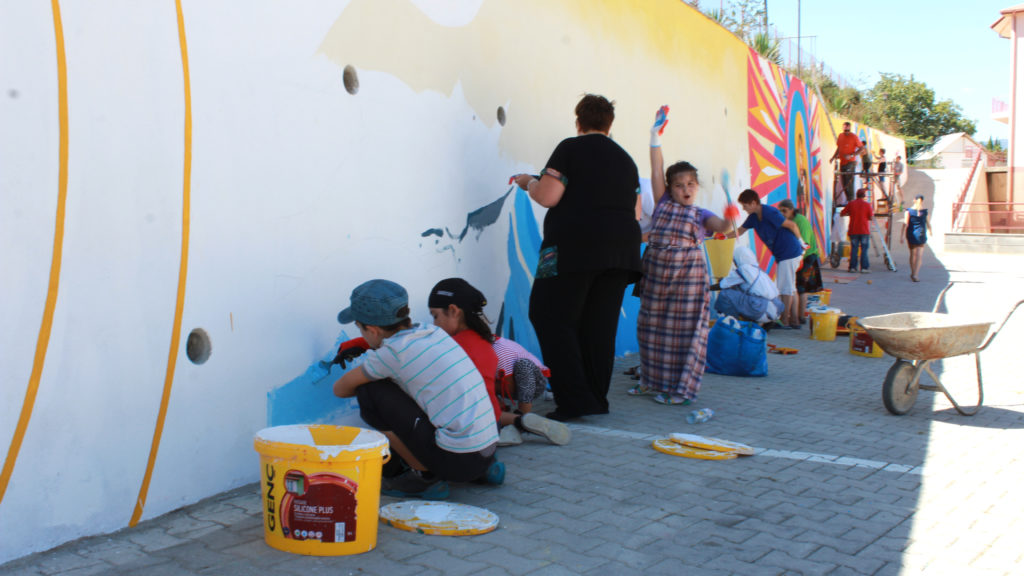 According to Adam, our work pleased employees and mentees in the center. For example, Sofo, a technical employee of the center, joined the work. Sofo is a painter, but 14 years ago, after the birth of his son, he abandoned painting and, as he said himself, he took on something serious. Now, for the first time since then, he grabbed for the brush. It was evident that he had great fun and talent. 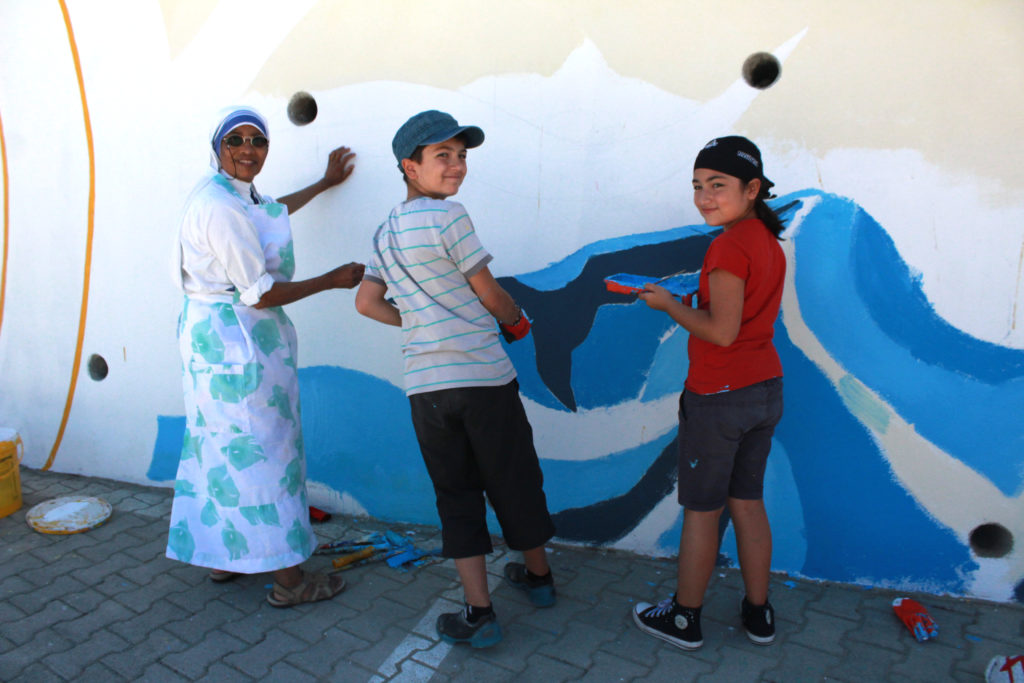 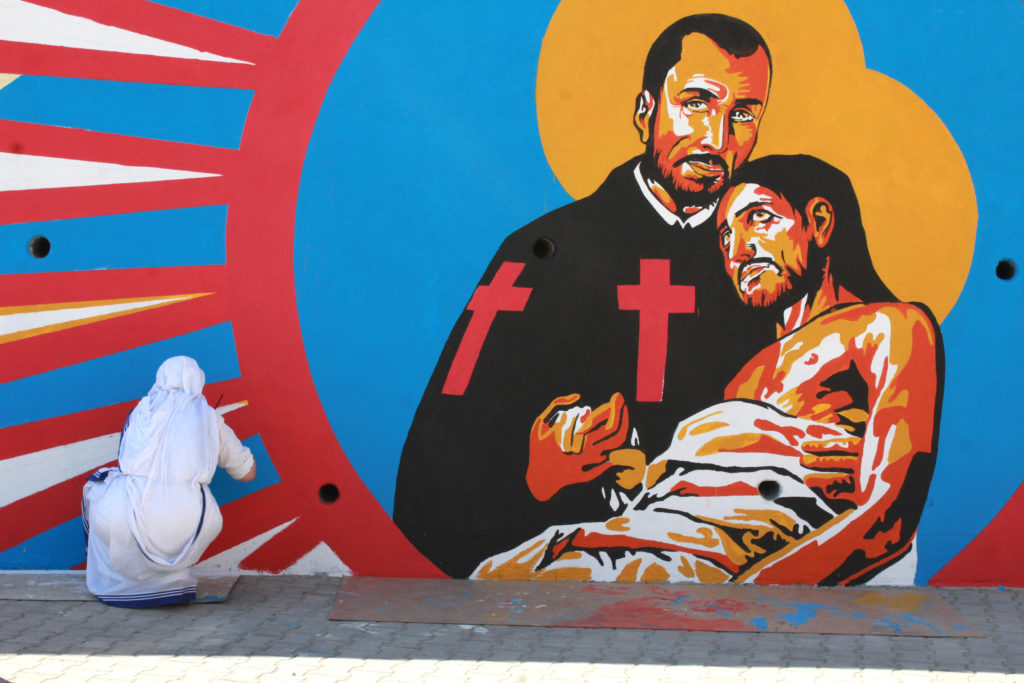 And now a bit about the message of the mural. The painting begins with a quote about love and trust without borders from the Book of Isaiah. Immediately after him we can see a reference to the Georgian tradition, a lion symbol, located in the coat of arms of Georgia. In the interpretation of the Director of the Kamilina Mission in Georgia, Father Paweł Dyla, a Georgian girl, presents the state of the soul of a man who trusted God’s mercy and the fullness of the work of mercy. 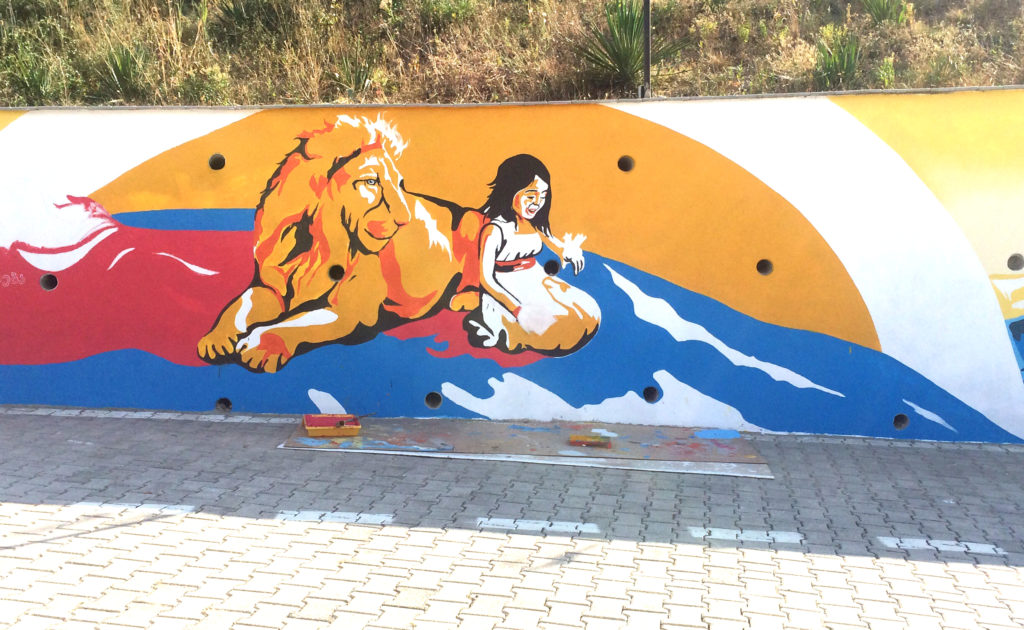 Orthodox and Catholic – patron of Georgia, Saint. Nino. The painting is also connected with the history of the Kamilians and their ministry. The third picture shows a giant of mercy – Saint. Kamila, who holds in the arms of Christ the suffering, epitomizing the suffering of the whole world, who come to the Center for relief and healing. On the fourth drawing, we see Bl. Klara. She was examined, an Italian who embodied bravery, struggling heroically with bone cancer. Her attitude is an inspiration for many sick people in the fight against their ailments and suffering. All figures emerge from the Georgian landscape of beautiful mountains and waves of the Black Sea. The mural is finished with the symbol of the vine – referring to the Eucharist, love without borders – God to people until the price of death. Winorośl also reports on one of the main branches of the Georgian economy. The mural is meant to carry the message of joy, peace and love, hence the very intense color and clean colors that stand out against the background of the surroundings, greenery and gray buildings.

The mural can be seen at the Kamilinska Mission Center in Georgia, at the Rehabilitation Center for the Disabled. Every day is a message addressed to residents and patients. He was painted on the occasion of the visit of Pope Francis on 30 September 2016 in Georgia.

If by chance you will be in Georgia, be sure to visit the Center of the Kamilians in Tbilisi,
where you can see the mural.

See where is the mural
Watch Facebook Kamilians Center in Georgia

0 comments on “Mural in Georgia”